The rise of the internet and the global digital revolution over the last decade has given rise to a modern way of marketing known as ‘influencer marketing’. An online influencer is an individual who has created an audience or fan base that they are able to influence via online channels such as social media networks. In many cases, influencers profit through promoting products to their audiences, which has now become a multi-billion dollar industry.

To understand the impact of influencers on consumers and their role within a full marketing strategy, GeoPoll conducted a dip stick survey through our mobile application in two of Africa’s most active countries online, Kenya and Nigeria, in the last week of July 2020. In this report, we present some of the highlights from the survey findings.

The most popular social networks in Kenya and Nigeria 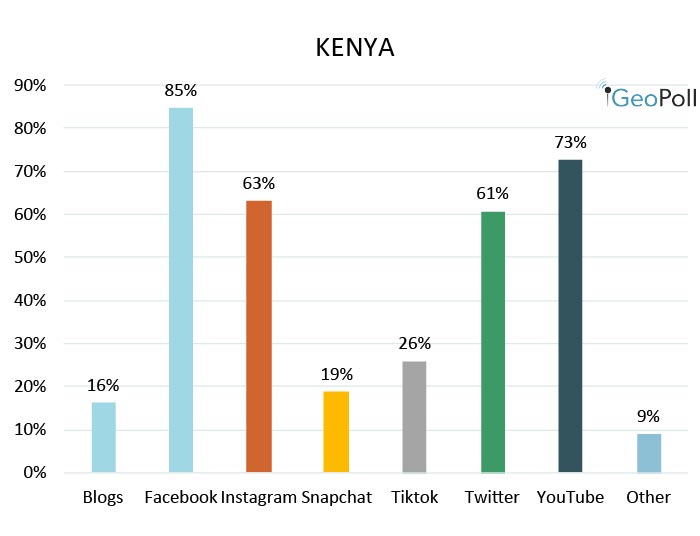 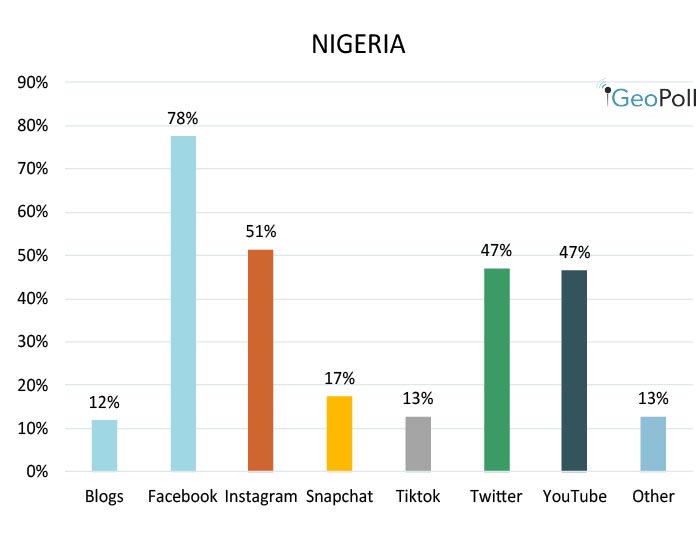 Next, we sought to understand social media users’ influencer following habits. All of the respondents (100%) in Kenya said they follow online influencers, compared 86% of those in 86%, affirming the growth of the stature of influencers. 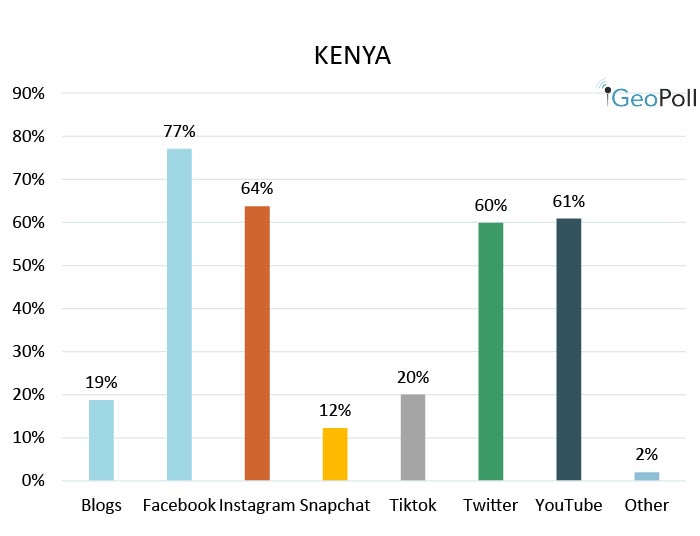 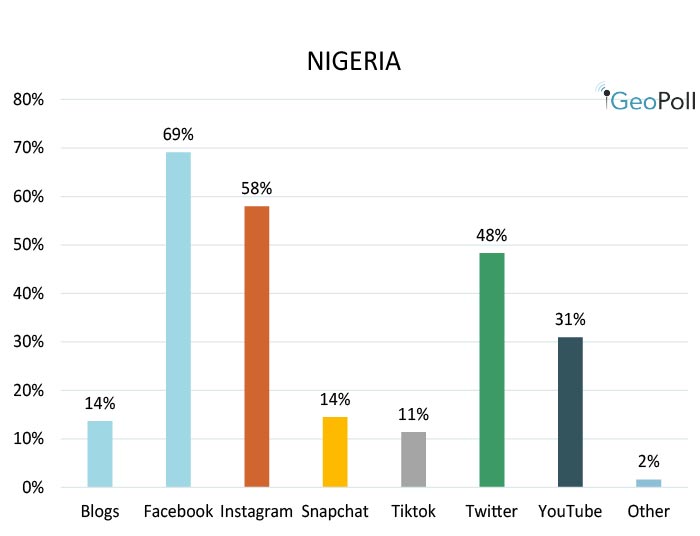 Most influencers focus on particular niche topics that they then create content around to engage their followers. In our survey, lifestyle, fashion, and technology influencers were found to be the most popular categories of influencers. 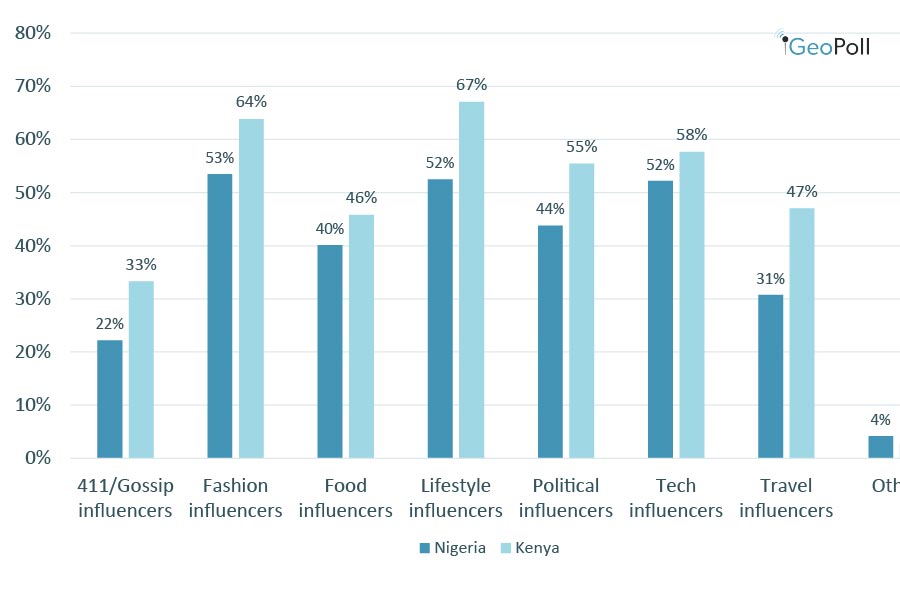 Influencers are normally expected to produce their own content in engaging ways, such as video posts, or live chats. Perhaps because consumers are normally looking for detailed information about products before they buy, product reviews were the most influential form of post in both Kenya and Nigeria (23%). The search for authenticity and connection with the influencers is also evident, with live videos scoring 17% of the total responses. 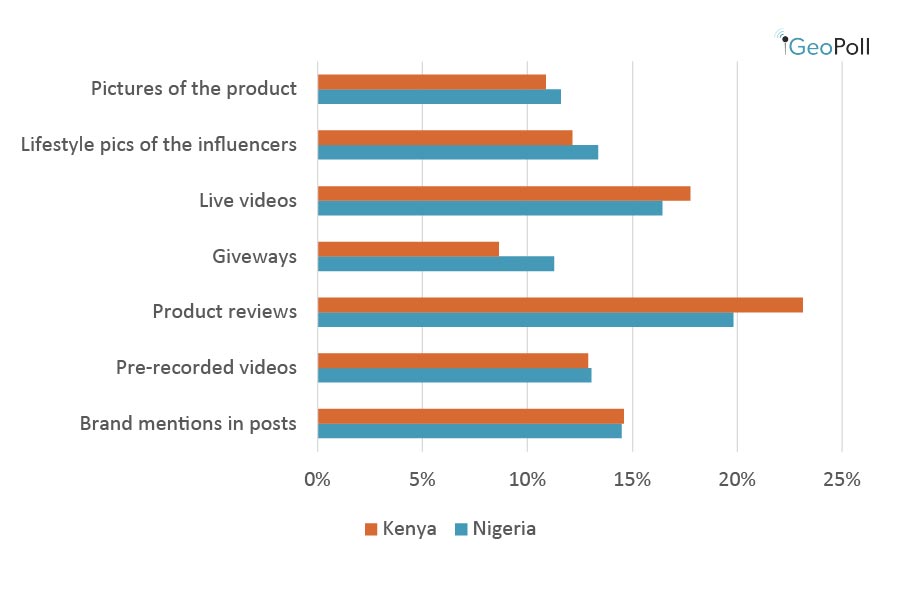 The success of any marketing campaign is driven by the trust and authority placed in the message or messenger by consumers. In influencer marketing, everything rests on if influencers and their reviews or recommendations can be trusted. This trust is the premise for the growth of influencer marketing, as people tend to believe the voices of people they know or like more than the brand owners.

From this GeoPoll survey, we found that 53% of consumers in Kenya and Nigeria said they would believe the word of an influencer over an advertisement from the brand itself.

Most trusted types of Influencers

Looking at the most believable types of influencers, we found that journalists and media personalities (51%) came on top, followed by industry experts (46%) and celebrities such as musicians and actors at 44%. 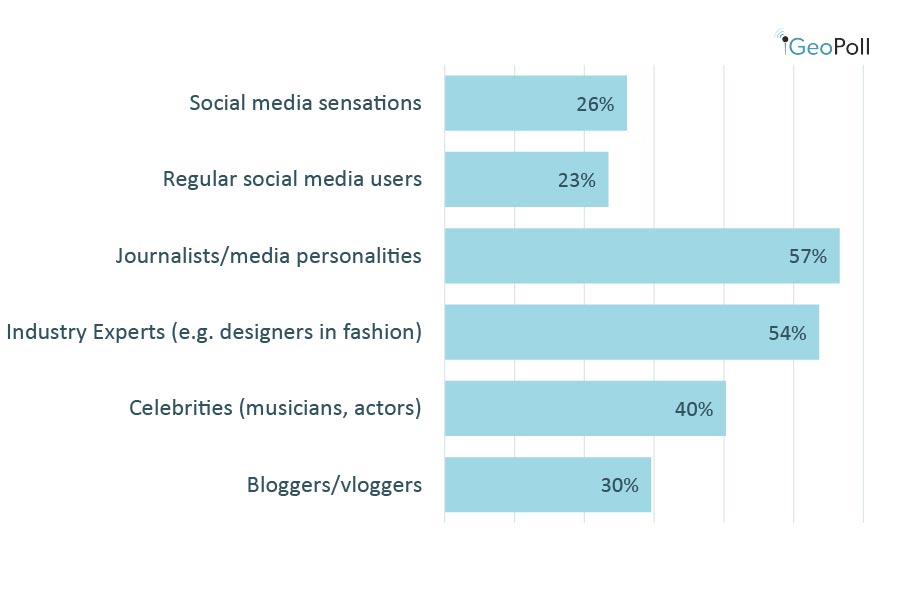 Almost all of the respondents (96%) answered either ‘yes’ or ‘sometimes’ to the question “Do you trust influencer product reviews/recommendations?” placing even more importance on influencer marketing as a product promoting channel. 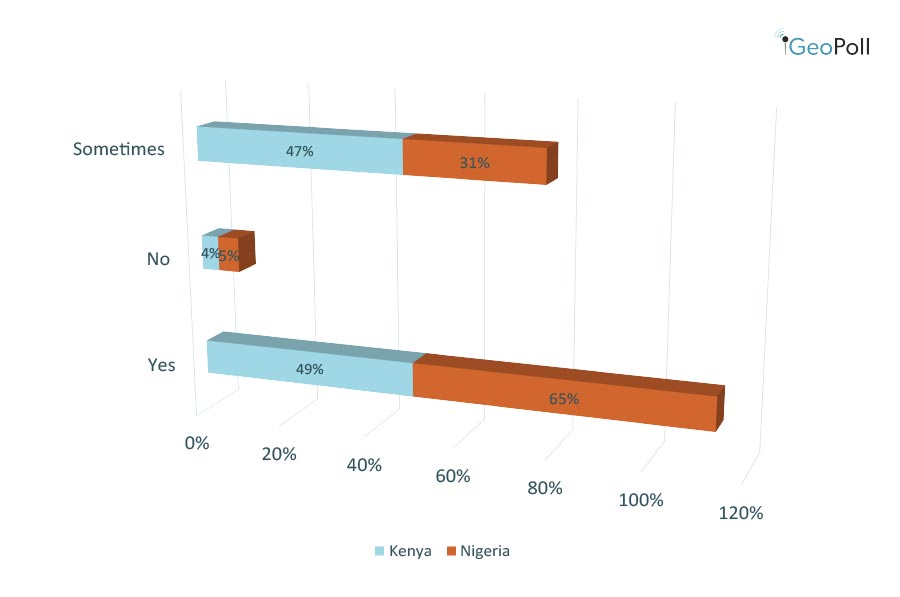 Ultimately, the real influence of influencers can be measured by how much they are able to drive real results. The results can be absolute, such as the number of units sold for a business, attendees for an event or votes for a politician, or relative, such as an increase in positive awareness and net promoter score for a brand. 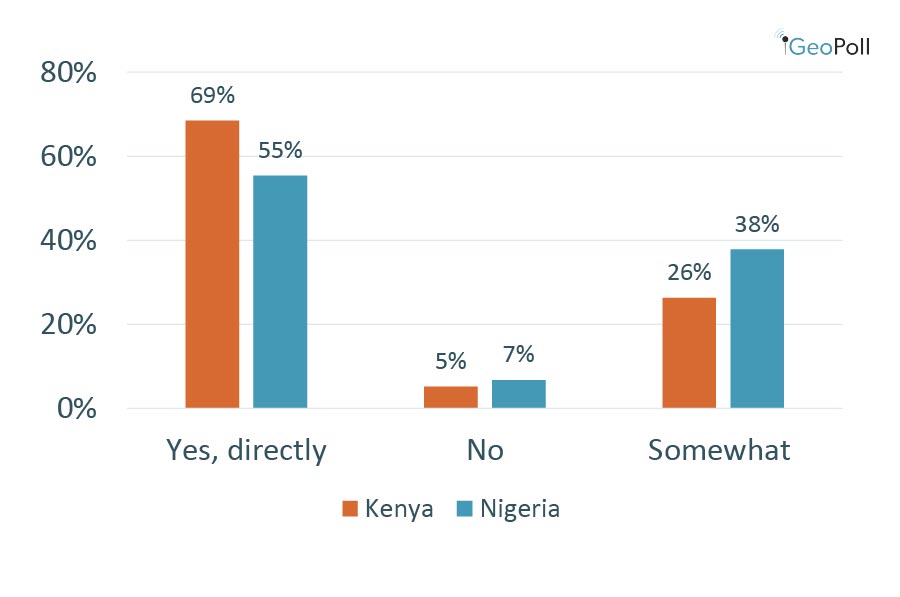 Top Influencers in Kenya and Nigeria

So, who are the top influencers in the two countries? We asked the respondents to name their favorite influencers from the top of their memories. We curated all the names provided into a list of the top 15 mentions in each of the countries.

With influencer marketing becoming increasingly important in digital marketing strategy, this GeoPoll survey in Kenya and Nigeria sought to understand how the consumer side perceives influencers.

The survey reveals telling insights. Influencers with relevant content continue to have a strong following as they win and retain consumer trust, which ultimately impacts purchasing decisions. Social media influencers who are trusted and followed by consumers still play an important role in affecting their purchasing decisions.

While more research is needed to close the loop, we hope this survey will help both brands and influencers continue growing better relationships with consumers.

Kenya Film Commission will award a total of Kshs 3 Million prize money to the winners of the 10th edition of Kalasha International Film and TV Awards. Each category winner will receive Kshs 100,000 prize [c]

The Real Housewives of Durban, the second South African instalment, coming to Showmax

The Real Housewives of Durban (RHOD) will now launch first and exclusive to Showmax rather than 1Magic on 29 January 2021, with new episodes following every Friday. RHOD replaces the Showmax Original reality series Uthando Lodumo, about Babes [c]