When compared to the third quarter of 2020, the total number of Distributed Denial of Service (DDoS) attacks increased by nearly 24%, while the total number of smart attacks (advanced DDoS attacks that are often targeted) increased by 31% when compared to the same period last year. Some of the most notable targets were tools to fight the pandemic, government organisations, game developers, and well-known cybersecurity publications.

DDoS, or Distributed Denial of Service, attacks are aimed at overwhelming a network server with requests for services so that the server crashes – denying users access. This can cause huge disruptions for organisations and businesses. Such attacks can last for several minutes or even a few days. So-called “smart” DDoS attacks go one step further. These attacks are more sophisticated and often targeted, and they can be used not just to disrupt services but also to make certain resources inaccessible or steal money. Both types of attacks were on the rise in the third quarter of 2021.

When compared with the third quarter of 2020, the total number of DDoS attacks increased by nearly 24%, and the total number of “smart” attacks increased by 31%. Both types of attacks also increased when compared to the second quarter of 2021, with the largest percentage of resources attacked (40.8%) located in the US, followed by Hong Kong and mainland China. In fact, in August, Kaspersky noted a record number of DDoS attacks in a single day: 8,825. 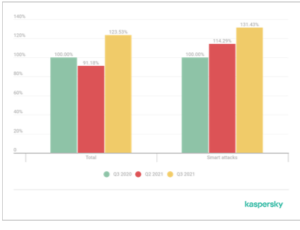 Some of the most notable, large-scale DDoS attacks over the past quarter involved a new, powerful botnet called Mēris, which is capable of sending out a massive number of requests per second. This botnet was seen in attacks against two of the most well-known cybersecurity publications – Krebs on Security and InfoSecurity Magazine.

Other notable DDoS trends in the third quarter included a series of politically-motivated attacks in Europe and Asia, as well as attacks against game developers. In addition, attackers targeted resources to combat the pandemic across several countries, and there was a series of ransomware attacks against telecommunications providers in Canada, the USA, and the UK. The attackers presented themselves as members of the infamous ransomware group REvil and shut down the companies’ servers to pressure them into paying the ransom.

Kaspersky researchers also witnessed a highly unusual DDoS attack at a state university that lasted several days. While attacks against educational resources are not uncommon, this one was particularly sophisticated. The attackers were after the online accounts of applicants to a state university, and they chose an attack vector that made the resource completely unavailable. The attack also continued after the filtering began, which is rare.

“Over the past couple of years, we’ve seen the cryptomining and DDoS attack groups competing for resources, since many of the same botnets used for DDoS attacks can be used for cryptomining. While we were previously seeing a decline in DDoS attacks as cryptocurrency gained in value, we’re now witnessing a redistribution of resources. DDoS resources are in demand and attacks are profitable. We expect to see the number of DDoS attacks continue to increase in the forth quarter, especially since, historically, DDoS attacks have been particularly high at the end of the year,” comments Alexander Gutnikov, security expert at Kaspersky.

The Realities of AI in Cybersecurity: Catastrophic Forgetting

There is a lot of hype about the use of artificial intelligence (AI) in cybersecurity. The truth is that the role and potential of AI in security is still evolving and often requires experimentation and [c]

For all the benefits provided by a connected world, people and businesses must be aware of the risks associated to living and working digitally. Web attacks, phishing, and spam remain some of the favourite tactics [c]

PacificLight conducts cybersecurity assessment to futureproof IT and ICS defenses

As part of its adoption and implementation of the Cybersecurity Act, which maintains national cybersecurity in Singapore and protects organisations against online attacks, PacificLight has recently conducted a comprehensive vulnerability assessment of its critical networks [c]