Over the last few years, a trend has emerged whereby most companies (and brands) now engage well known and popular personalities to act as their brand ambassadors or champions. Also known as Influencers, the individual brand champions then push products from the vendor (or manufacturer) upon launch to the potential buyers, through various communication channels. These include traditional media platforms as well as emerging digital and social media platforms.

Working as part of, and with, the specific company’s or brand’s marketing team, the Influencer(s) then put out key positive messages extolling the unique features and unmatched benefits that potential buyers would gain were they to purchase the product (or service) which has been launched or being promoted in the market. I’m sure we have all seen popular figures and celebrities pushing various brand (marketing) messages on Facebook, Instagram and Twitter, all in an effort to influence your purchase decision.

But do brand Influencers really play a significant role or determine a prospective buyer’s eventual decision as relates to purchasing a particular product? Results from a recently-released research shows that Influencer’s opinion doesn’t ultimately determine user’s decision to give out their hard-earned cash to buy a product.

“Influencer Marketing is all the rage today. But just how influential are they? Our research shows that while influencers are a key component of any marketing strategy, they are not to be utilized in isolation,” notes the report, compiled from a survey conducted among adults aged between 25 to 44 years residing in Nairobi. .

The Redbrick Africa research findings were released during the 5th Annual Top Marketers Club Conference in Nairobi on December 2, 2022.

From the survey respondents, a majority said that they’d buy an item recommended online by someone they know personally; about 65% said they trust brands which they interact with online and also trust online reviews of products sold online;  while less than 60% of the respondents stated they would buy a product promoted online by a social media influencer. 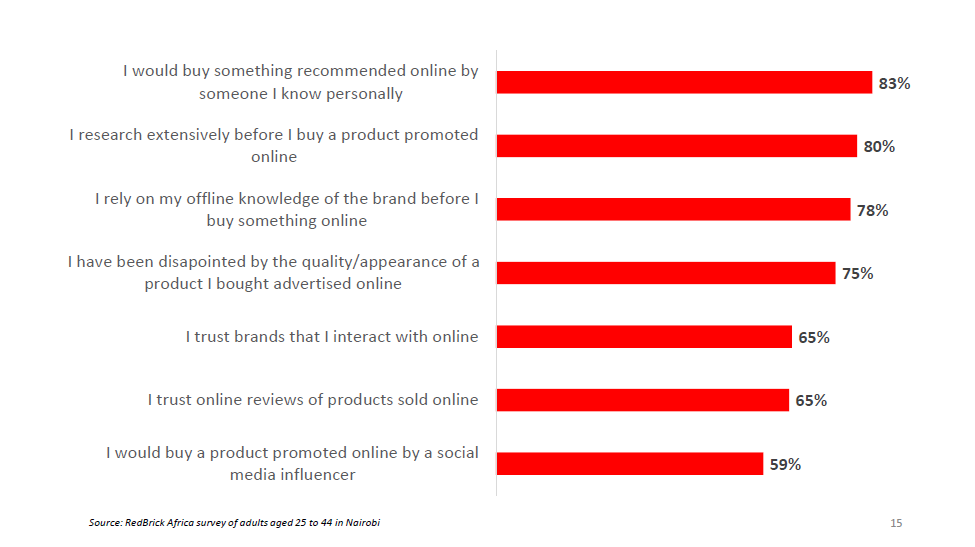 According to the Redbrick Africa survey, the majority of people online in Kenya are male, while the typical social media user in the country is aged between 25 to 34, is male. He prefers Facebook as his main social media platform, and spends 5 hours daily online. Still on Facebook, the platform is by far the biggest in Kenya, accounting for 5 times more users than those on InstaGram or Twitter. In view of the above, and for companies and brands to ensure that they come up with successful marketing campaigns involving the use of Social Media and Influencers, the report calls on marketing teams to recognise a various factors. These include the fact that people relate better with personal connections (as already stated above when making purchasing decisions); that brands with an offline presence are more trusted online; that there exits a general mistrust of
brands that self promote on social media; and to ensure that as a Social Media Influencer, the more knowledgeable you are about the topic, the more credible you are (to potential customers who interact with your posts and messages about the topic or brand).

In so doing and after the above has been taken into consideration, the team behind the said Influencer Marketing or Social Media campaign will then have hopes of getting (and maybe holding) the attention of a typical Kenyan Social Media user – defined as a 25 to 34 year-old adult male on Facebook, Messenger, YouTube and LinkedIn. The correctly crafted campaign may also be able to pull in and attract the interest of a typical Kenyan consumer – mainly a 25 to 44 year-old adult male living and supporting his household on a monthly income of under Kshs 50,000.

Influencers: How influential they actually are in pushing products in Kenya and Nigeria

By Frankline Kibuacha The rise of the internet and the global digital revolution over the last decade has given rise to a modern way of marketing known as ‘influencer marketing’. An online influencer is an individual [c]

The Style Group of Nigeria takes to Instagram to boost sales

The Style Group, a contemporary lifestyle retail group in Nigeria, is leapfrogging the brick-and-mortar sales of fashion, accessories and design services and instead focuses on offering them via social media commerce channels. In Nigeria’s vibrant [c]

Consumers’ shrinking wallets have sparked drastic shifts in spend, purchasing habits and routines as they try to cope with the harsh economic effects of COVID 19, a new report by marketing agency Scanad shows. Dubbed [c]